via Vampires, Zombies and Ghosts Vol 1

And I know whose I’m going to read next!

No, believe it or not, my story isn’t a vampire story! It’s a ghost story, and needless to say, a wee bit of a romance, too. 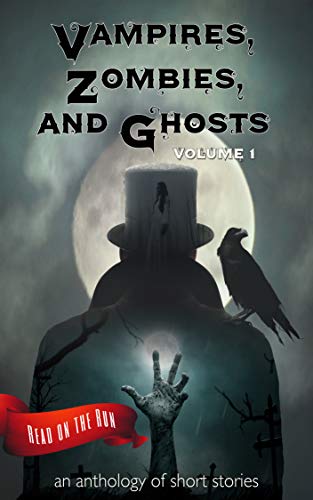 Now available for Kindle on Amazon!

Be sure to check it out. The paperback should be coming shortly.

Jet Setting in a Heat Wave!

Just back from a very fun, very fast, but very hot, trip to New York for the launch of Machinations and Mesmerism: A Tribute to E.T.A. Hoffman at The Footlight. Apparently if I’m going to New York, it’s going to be stupidly hot as instead of doing some exploring after arrival, I decided it was better to hit the hotel restaurant and take a car service over, since the heat index was pushing 105.

It was a small but enthusiastic turnout to see me, Michael Cisco, and LC von Hessen read our stories from the anthology and to hang out at the very fun little venue. Don’t let the address fool you-this is not a scary area (though the route the driver from the hotel took me gave me some interesting ideas for Aleks’s adventures as a P.A. in New York–more on her later. Remember, leash, curb, and clean up after your thug!*)

*Actual sign seen on a chain-link fence in one of the more dubious areas.

There was a strange theme of teeth going on with the readings. Of course, Sophie Vestergaard, my rather mundanely eerie character, has every good reason to be interested in them as besides her more unsavory hobbies, she’s a forensic ondontologist. I’m sure my mother (who used her DDS for much more general practice) would admit, it’s easier to examine the teeth when you can just flip the skull over and detach the lower jaw! 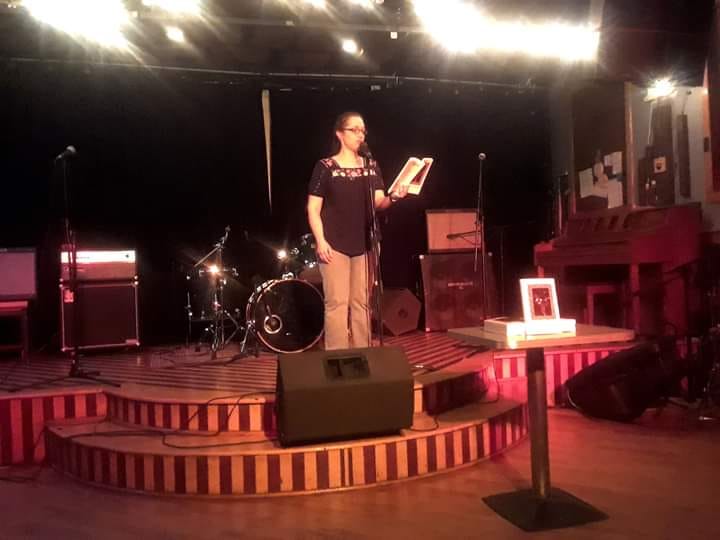 I’d hoped to dress a little nicer, but after trying on everything in my closet I realized 110 in the shade combined with airline air conditioning meant jeans and a peasant blouse was the most practical thing I had. Not pictured: my new pearl-encrusted tiara from Half Lucid Jewelry, which the amazing and talented Kendra L. Saunders made me and which will be making its debut at a Cunard masquerade ball near you (if you’re in Nova Scotia or the North Atlantic.) Not only does she work for the fantastic Footlight and write the Dating an Alien Pop Star series, she makes sparkly things! For very reasonable prices, too.

Looking forward, I’m happy (and relieved) to announce that my story “Storm-Spun” will appear in the forthcoming Tales of the Siblings Not-So-Grim anthology from Hollow Hills Books. Pleased, because I’m always happy when someone decides they want to pay me for my writing, and relieved because this is a story that’s been picked at and revised and resubmitted several times, so I’m thrilled it’s finally found an appreciative home. Hopefully this means there’s a reason to keep going now I’ve decided this one has longer potential after all!

Easiest Bread Ever (Even on a Hot Day)

So I may have mentioned something about food in explaining what I wouldn’t be blogging about. Besides liking to write about it (Eva in Only Ever Slowly isn’t a baker by accident) I am an expert procrastibaker. If I want to put some things off, like writing or working out or mowing the lawn, there is always baking. If you’re hungry after reading something I wrote, you’re welcome.

So today, despite it being about 90 degrees outside, I decided to break in my new King Arthur Flour stoneware bread bowl and discovered the easiest bread ever.

No, it’s not actually from that cookbook, but I am definitely channeling my Polish and Ukrainian forbearers here.

Unlike some of the other things I’ll make when I feel the need to “research” instead of write (I’m sure one of the exotic dishes Eva forced on Carl in the cafe was Crimean chebureki, though my version is healthfully baked instead of fried and there’s some pumpkin sneaked into the dough) this bread is incredibly simple. You can use a stoneware bowl, a loaf pan (I used both, since this made more dough than the bowl can hold), or add more flour to make it stiff enough to stand up on a pizza stone or a baking sheet.

So since I hate those food blogs that dink around with a mile of text and a bunch of photos and videos, here’s how to make your own easy crusty fresh bread:

(I used non-iodized table salt because that’s what I had. If you feel the need to use kosher salt or sea salt, use a little more as the crystals are larger. It won’t improve anything or make any difference as it’s all sodium chloride, but it does sound more trendy.)

(I used a candy thermometer to get the approximate temperature. Too hot and the water will kill the yeast, not hot enough and they won’t bloom as much.)

Pinch sugar
(I used brown because the only white sugar I have at the moment is vanilla sugar. Any sugar’s fine, just make sure it’s just a pinch. Do not use honey or agave or any liquids as that will change everything. It’s just there to feed the yeast. For heaven’s sake do not use artificial sweeteners. The yeast won’t like that at all.)

I did this with a KitchenAid five-quart mixer, a large Rubbermaid bowl with a lid, and a four-cup small bowl for the yeast. You could hand-mix if you want, but the mixer is much easier.

In the bowl of the mixer, use the whisk attachment to mix about four cups of the flour and the salt.

In the four-cup bowl, gently mix the warm water, yeast, and the sugar. Let it sit for a bit until it gets foamy.

Replace the whisk attachment on the mixer with the dough hook. Pour the yeast mixture into the flour and begin slowly using the dough hook to combine. Add more flour until the dough becomes a single mass around the hook. Let it beat for a while. Maybe ten minutes. You’ll hear the thunking. When ready, the dough should be tacky, but not sticky. Add more flour if necessary.

Take the lidded bowl and pour a little oil into it, enough to coat the inside. Transfer the dough in a ball to the bowl and make sure to lightly coat the whole thing in oil. At this point, you can either put the lid on the dough and put it in the fridge for a slow rise. This will take several hours, but is great if you want to bake bread in the morning but not get up at baker’s hours as you can let the dough slow-rise over night. Otherwise, lightly cover the bowl with a kitchen towel and set it somewhere warm. Since it was ninety degrees out today here, that wasn’t a problem, but any warm corner of the kitchen will do. If you’re doing this in winter and your house is cold, you can turn on the oven, let it warm a bit, turn it off, and let the bowl sit on the top. Let it rise for two or three hours, until it’s a bit more than doubled. There’s no exact time on this for a reason: bread is finicky at times, and the temperature and humidity in your house or apartment or wherever you’re doing this will affect the rise time. Don’t stress about it unless it doesn’t rise at all. In which case you might have dead yeast and you’re not going to get bread from that.

After the first rise, punch down the dough. You shouldn’t need to flour your hands if it had enough flour and oil from before. I actually split the dough after punching it down and worked each loaf by hand above the bowl, rather than kneading it on the counter.

I baked the round loaf in a King Arthur Flour stoneware baking bowl and a regular loaf in a loaf pan. I oiled (not buttered/greased) both pans. You can try without, but it reduces the chances of the bread sticking. After punching and working the dough, form the loaves, put them in the pans, and cover them to rise again.

Now you can get the oven ready.  Before heating the oven, put the broiler pan on the floor of the oven, or another shallow, non-glass/non-Pyrex dish. Preheat the oven to 460° F and let the loaves rise until a little more than doubled. This again could be a half-hour, could be an hour. I let it go around an hour or a little more.

Remove the towel. (Yes, I know that, you know that, but if I don’t say it someone will forget.) Get a cup of hot water read.

Put the loaves on the middle rack of the oven. Before you close the door, empty the hot water into the broiler pan on the bottom of the oven and VERY QUICKLY close the door to trap the steam. This will help get that crusty outside.

Set the timer for about thirty minutes. Your oven times can definitely vary, but you’re probably looking at 28-32 minutes. Resist the urge to open the oven to peek as it gets close to time. Do use the oven light to check and make sure the tops aren’t browning too much. When the tops are golden and rapping with a fingernail makes a hollow sound, they’re done.

Have a couple cooling racks (ideal) or hot pads (not as much, you want the air circulating underneath for even cooling if possible) ready for when you take them out. Seriously, don’t pick up a hot pan without having a destination in mind. Let the bread cool in the pans and then turn out to finish completely before slicing. Or just tear into it as soon as it’s cool enough not to give you third-degree burns.

Just up, my new author Facebook page! https://www.facebook.com/AuthorJenniferQuail I’ll be sharing posts, photos, and other information there as well. Right now, the banner image is a hint of the inspiration for my current short project.

I have my own copy in my hot little hands (and a couple spares; use the contact form if you’re interested in a signed copy!)

And now on lulu, with an Amazon edition coming soon, is Machinations and Mesmerism: A Tribute to E.T.A. Hoffman from Ulthar Press, including my short story “Deadhead”. Of course I had to submit. It’s Hoffman. I read The Nutcracker every year at Christmas (and sometimes in the middle of summer, too.)

Related to that, I have my first real jet-setting author experience coming. Ulthar Press is holding a book-launch party and readings at The Footlight in Queens, New York. I will be reading, as will several other contributors (and the fact the club’s managers include my friend the amazing and talented Kendra L. Saunders is just one of those weird coincidences Hoffman I’m sure would appreciate as much as I do.)

And coming up, Smoking Pen Press, publisher of A Kiss and a Promise (featuring my short story “Only Ever Slowly”) is only weeks from release of Vampires, Zombies, and Ghosts: Volume One, which will include my short story “GhostLife.”

In non-writerly (mostly) news, I have a question: how long in advance is too long to be planning everything you want to do on your September vacation? Like, daily itinerary! And given where I’m going, I’m hoping for some inspiration for Anders (see my Urban Crime entry) and Julie and their adventures on her home turf. I wonder what Anders will think of poutine?

Hope everyone is getting better weather than here. Not that I’m biased in both respects, but around here, this is excellent weather to chill a bottle of white and stay in the shade (or the air conditioning!) with a glass of wine and a good book.