So This Villain Thing of Mine 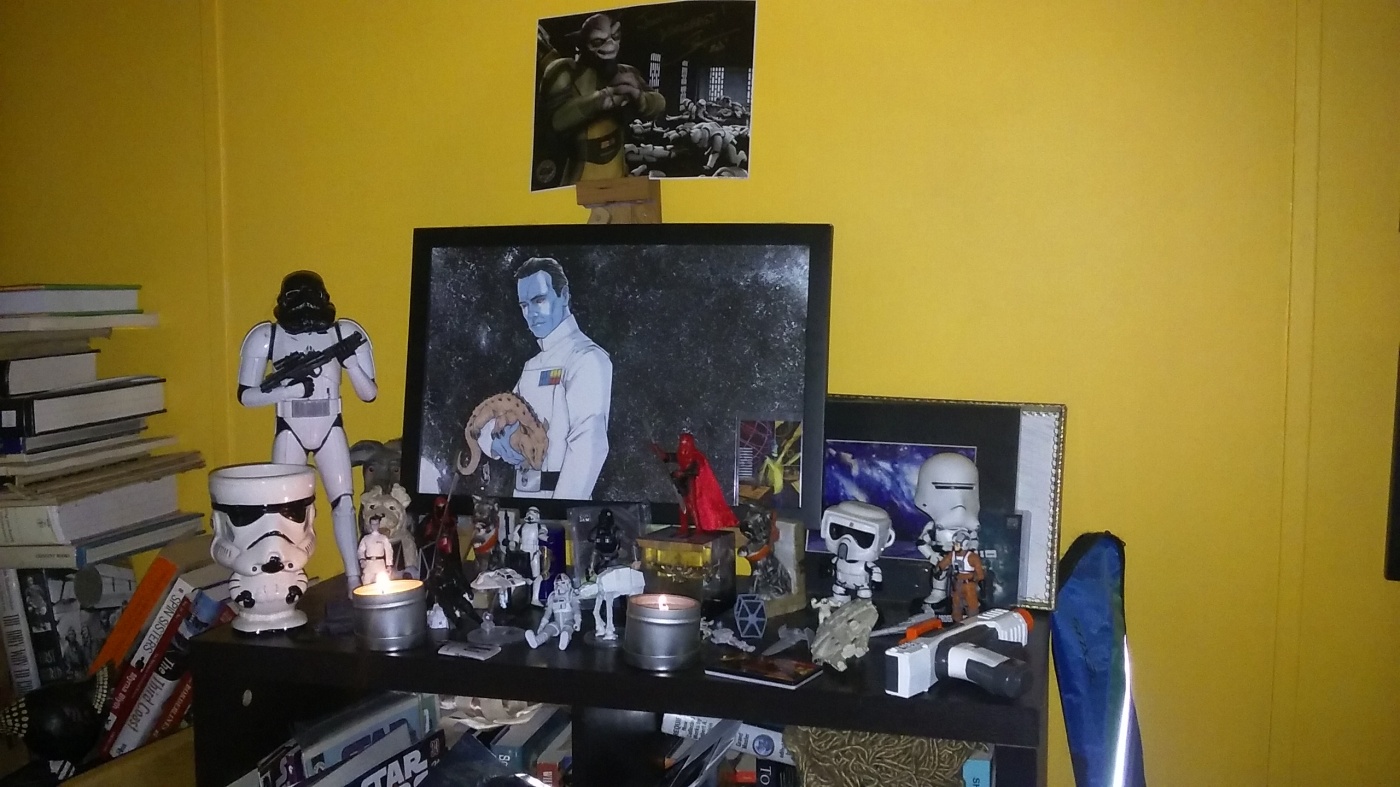 So you might notice I have a decorating theme going on here.  Not pictured: the Sideshow 1/6 Grand Admiral Thrawn or the Gentle Giants mini-bust of same. Needless to say, it’s not really a surprise two of my most common user names on the internet since back in the days of 14kbs dial-up are “TIE Pilot” and “Imperial Girl.”  All of this can be traced back to one particular character, Grand Admiral Thrawn, antagonist of Timothy Zahn’s Star Wars trilogy of novels beginning with Heir to the Empire.  If I look at my characters, whether it’s in fan fic (where Thrawn himself plays a prominent role) or even in “real” books, particularly at characters like Mark Valentine in Strange Roads or Joszef Kiraly in the gaslamp fantasies, it’s not all that hard to see Thrawn’s influence, or that of his partial inspiration, Sherlock Holmes (who may be an unequivocal good guy, but who definitely has his anti-social moments.)   While we all know what Freud would make of my being twelve when I first read Heir on exactly why Thrawn made such an impression, influencing my switch to rooting for the Empire (and I’m not saying he’d be entirely wrong), there’s more to it than just a tall, dark (and blue) bad guy with impeccable manners and a taste for art.

Though in fairness that IS a big part of the appeal.

The reason Thrawn, some depictions of Moriarty, and other ‘cultured’ villains can be appealing to me is because the defining characteristic of these characters is they’re smart.  Sherlock Holmes, one of my favorite abridged-for-young-readers heroes as a recently-learned-to-read tiny kid, was smart first and foremost.  I’m also an enormous fan of John Bellairs, author of the Lewis Barnavelt books (starting with The House With a Clock in Its Walls) and the Johnny Dixon series (The Curse of the Blue Figurine)  in which not only are the kid heroes like Lewis, Rose Rita, Johnny, and Fergie smart, the adult good guys are not just clever but book-smart, often in obscure ways.

Where Thrawn stood out, though, was this was the first real example I had of a villain who wasn’t in it for the evil kicks.  As a little kid of the generation for whom “the sky is blue, the grass is green, Darth Vader is Luke’s father”, I was used to the bad guys being bad because they were bad.  They seemed to want to be mean mostly for fun (which tracked with my general elementary-school experience about people in general, so it worked for a time.)  Heir to the Empire, though, was the first time I was really confronted with a story where the good guys weren’t going to win just because they were, well, good.  Luke, Han, Leia, they’re all still good people, and most (though not all) of their New Republic allies are as well.  But not everyone is ready to jump on the bandwagon, and not because they’re evil.  And to beat Thrawn, they would have to out-think him.

The good guys win basically because of a deus ex machina (a very well-set-up one that makes perfect sense and is even poetic justice, but is still out of left field).  They can’t outsmart the villain.  They don’t luck into him making a fatal error.  He’s just that good.  After a while, Thrawn does eventually cease to be a villain in backstory (go ahead, read the novella Crisis of Faith, remove what few direct reference to Star Wars canon are in it.  You just read a very entertaining sci-fi novella in which there are maybe two humans with speaking roles and in which the good guys happen to be the Empire from Star Wars.)   But even when he is the antagonist, Thrawn is good at what he does.  He makes the good guys work for the win.

As I was pretty young when I read this, it was my first real introduction to the notion of wanting my heroes to earn the win.   And . .. it works for me.  I find many of the cases where I am rooting for the villains are those where the creator seems to assume that as long as the heroes virtue-signal as nice, then any scenario that allows them to win is okay.  Note that  I don’t include Heir to the Empire here.  The good guys earn their victories there.  The best kinds of stories are not those where good triumphs because . . . good.  The best ones are where sometimes, even if it’s rather twisted, the villain might well have a point, and be good at his job, and not be a horrible person, just in opposition to the heroes.  And to beat him or her, they have to be smart.  They have to work for it.  There’s no fun in watching good triumph over evil if evil does half the work for the heroes and left on their own, they’d have trouble managing a chicken-cleaning contest, let alone defeating the villain.

And if you want to go for absolutely evil?  Go for it.  You don’t need to have them ripping the heads off babies, but remember, Darth Vader didn’t give his underlings a stern talking-to when they failed him.  But if they ARE absolutely evil, remember the big question for any character: Why?  I’ll get to that one another time.

This is not a blog.

Blog would imply that I’m going to write about me, which I suppose I am in the sense I am writing about things which interest me.  But this is not the kind of author’s blog where I’m going to talk about the process of writing and pretend to offer sage advice.  Nor am I going to talk about the seriousness of my craft and its significant meaningfulness and the deep emotional investment and trauma required by “the craft.”  Frankly I’ve got books to write and anthology deadlines I’m trying to meet.  And I’ve never met a successful full-time writer who writes fiction who is prone to deep philosophical discussions of the craft.

But they say that authors ought to have blogs, so I figured if I’m going to leap on the bandwagon, I might as well write about things that interest me and which might give any interested parties a look into how this particular writer’s mind works.  Topics may include but are not limited to why I always seem to like villains, painting and drawing as note-taking, food in fiction and my pet peeves thereof, what my adorable Corgis are doing, tales from the day job (where I often get to party like it’s 1799) and sometimes, excerpts and comment on my own work.  Writing and otherwise.

Featured Image: The Road After Dark, acrylic on black canvas, 2014.  This is my road as seen on a winter night, based on what I see when I walk the dogs.  Not necessarily as might be seen by others.